Rules are necessary to ensure the safety of Club members, their property and the public as well as the continued use of our council approved site. They have therefore a positive objective although they carry the price of restricting our freedom.

They supplement, and therefore should be read in conjunction with, the comprehensive safety guidelines published in the BMFA handbook. Every club member who uses the Randalls road site should do so in the knowledge of these rules and agrees to observe them in the letter and in spirit.

Continued breach of any of these rules will lead to grounding of the person concerned. In cases of severe negligence the committee reserves the right to dismiss the member from the club.  The LMFC site is restrictive because of surrounding houses and activities.

When using the EAST-WEST runway: Stand on the South side of the runway and face North. Do not fly behind your position as you will endanger the Pits and car park areas.  You must not use the EAST-WEST runway under any circumstances if there are footballers on their field.  Before approaching from, or taking-off towards the West first ensure that no onlookers walking in the field or on the footpath near the runway or in line with it. 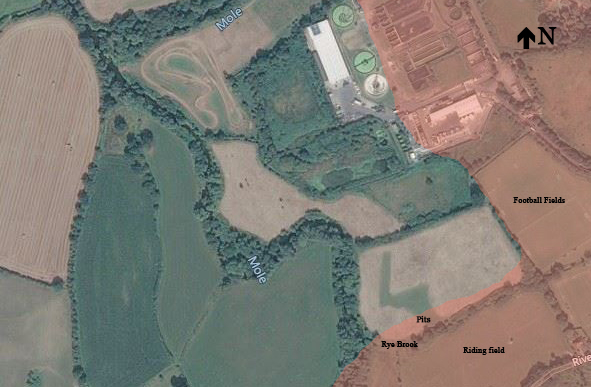 Flying area Limits with E/W Runway in use.   This runway only to be used when there is no football match in the field to the East of the site.

The Pits area and Car Parking area are out of bounds at all times.

The Football Field is out of bounds at all times.

The Recycling and Waste Centre are out of bounds at all times.

Flying over the sludge ponds is strongly discouraged.

When using the NORTH-SOUTH runway (this runway must be used when football is being played on the adjacent field on a pitch either in line with the runway or to the North side of this line): Stand on the East side of the runway and face West. Do not fly behind your position.  Before approaching from, or taking-off towards the South first ensure that no onlookers are walking in the field South of the Rye Brook or on the footpath near the runway. Appoint a look-out if necessary. 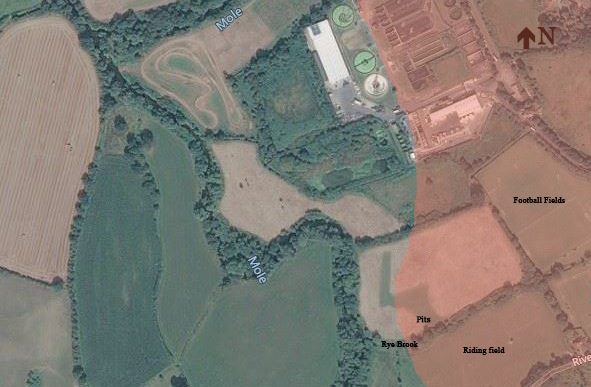 Flying area Limits with N/S Runway in use.

This runway only to be used when there is no equestrian event in the field to the South of the runway.

The Pits area and Car Parking area are out of bounds at all times.

The Football Field is out of bounds at all times.

The Recycling and Waste Centre are out of bounds at all times.  Flying over the sludge ponds is discouraged

Never fly over the Riding Club field (S. of the Pits area). Never fly over and avoid flying close to the Recycling and Waste Centre (North of the flying field).

Never perform aerobatic manoeuvres over or close to people.

Always wait for dog walkers to clear the end of the runway before starting your take off.

Only the use of equipment operating in the 2.4GHz and 35 Mz band is supported. The use of the 27 MHz band is no longer allowed at the club field.  Members are strongly recommended to use equipment operating in the 2.4GHz band. (Note:  Don’t forget if you are flying with models on different frequencies to extend your aerial on the 35MHz Tx – so easy to forget after using 2.4GHz!)

The Club operates a peg board for the 35MHz band.

The following practices should be followed in the pits.

No one should be standing in the plane of rotation or in front of the propeller when testing for top-end performance.

Do not taxi aircraft in or back to the Pits area.

Prior to walking onto the take-off strip, before or after a flight, check with other pilots for permission. Check all controls for “full and free” before take-off. (Ensure all control surfaces move in the correct sense). The BMFA “SMART” pre-flight check routine is strongly recommended.  Confirm to all other pilots when you are clear of the strip.

Pilots should stand near each other while flying. This ensures clear communication during flying.

It is advisable to have all new or substantially modified models independently checked before first flights.

Under no circumstances can models with known faults that render them potentially un-airworthy be flown. Any Committee Member can require faults to be rectified and the remedial action thoroughly checked before flying.  If you have any doubts about your model aircraft do not fly.

The Club operates to a standard of 79dB at seven metres. If you are in doubt about the noise level of a new model/engine combination ask for the noise level to be checked on the club meter.

Any committee member can ask for your engine noise to be checked at any time.

On older engines, silencing to the required level will usually require add-on silencers. In judging the noisiness of an engine the opinion of Committee Members is final. Choice of propeller can have a large impact on noise level.

The club has a BMFA qualified instructor and a number of Club instructors.  Only these people can give tuition and “air time” to beginners. Instructors must take novices up for the initial training flights but we also have a number of assistant trainers who can thereafter give air time and practice. If you are an experienced flyer and would like to assist in training novices, please ask the training officer who will be pleased to discuss this with you.

The CAA and the BMFA make clear that safe flying is the responsibility of both pilot and club. We fly in a field which has full public access. Maintaining high standards of safety at the flying field is essential to reduce accidents to a minimum and safeguard the well-being of all club members and all members of the public both inside and outside our field. Simple checks before leaving the pits are essential to ensure correct operation of control surfaces, a successful take-off and safe flight. These should be routine safety behaviours practiced without fail by all pilots. There have been several reports that such checks are not being made, leading to a loss of control and crashes at take-off. All club members have a responsibility to enforce safe practices and behaviours, prevent such accidents and to help maintain these high standards of safety..

Should an accident occur which involves a third party or their property, immediately inform any present committee member and then the Secretary of the Club.

In any discussion with a member of the public – do not become aggressive or rude or defensive. Simply ask a Committee member to intervene. If one is not present give the third party your phone number and the Club Secretary’s (currently 01372 454010). Try to be helpful and sympathetic. Remember if you have an accident involving a third party, it will usually have been your fault.

The circumstances of all accidents must be recorded on an incident log sheet (available at the field and on this site in the Members Only, Documents section).

Our definition of an accident is:

The weight limit for model aircraft on our site is 5 kg for normal flying.

Between 5 kg and 7 kg flyers must have a BMFA ‘B’ certificate and must be accompanied at the pilot point by an assistant, who is also qualified to BMFA ‘B’ level.

Flying times vary throughout the year depending on the daylight times. Any changes will be announced on the website in the ‘what’s on’ section.  Always check for a keyholder attendance and expected arrival time using the LMFC WhatsApp group

Only three IC power models are allowed in the air at once. There is no such restriction on gliders (without IC engines) or electric flight models.

Bungee or tow launching of gliders may not take place during a power flying session. The use of a short bungee to assist take off for certain power models (e.g electric ducted fan types) is, however, acceptable.

Flying alone is not permitted. There must always be at least one other Club member present.